Katherine Goldman is a professional with world-class skills. Yet the expertise of Goldman & Associates doesn't lie within the scope of legitimate commerce, but in the underground sphere of stealing priceless treasures and delivering them to the highest bidder.

Katherine lands in Scotland to boost some relics, yet what she discovers is so shocking, nothing in the experience of this notorious thief prepared her to collide with a dark, rakish man wearing plaid – who happens to be trapped inside a mirror.

A Man Imprisoned in Time

Centuries before, Simeon Campbell had no idea the woman he charmed was a witch of unspeakable power. When Simeon refuses her gift of immortality, he quickly learns there is no wrath like a woman scorned. Cursed to spend eternity within the bonds of her enchantment – Simeon is lost in time, and nearly bereft of hope. Until he's accidentally released into the care of this woman of dubious character, in a century he could never have imagined…

As the pair plunge into a journey to outfox the jilted witch, this man of honor is determined to stop at nothing to save the woman he swears to protect. But Katherine stubbornly knows better than to clash with an enemy face to face. If Simeon is determined to defeat ancient evil at its source, he's going to need help.

He's going to need a thief.

How To Steal A Highlander

Kat stretched a shapely leg toward the ceiling and leisurely squeezed the water from a cloth. She appeared mesmerized at the droplets trailing down her skin. Slowly, she faced him and expelled a little laugh.

“Sidh!” Simeon commanded in a tone so fierce, Kat flinched a second time. The dog promptly laid on the floor with a whine and rested his head on his massive paws.

“Don’t use that tone with my Angel.” Kat caught the dog’s eyes, flickering in trepidation beneath his bushy brows, and then cooed and made kissy noises toward the beast, earning an affectionate twist of his ear. Clootie’s head raised, and he panted a smile.

Simeon’s brows shot up, and then deepened to a dark scowl. That tone? He’d been near out of his mind with worry for her and her improbable journey, and from the looks of her upper half at least, she’d arrived hearty and hale. Yet the lass’ concern was the tone he took with his dog? And if he was not mistaken, she didn’t appear happy to see him. Simeon sputtered once more, too incredulous to speak. In two strides he was beside the tub just as Kat eased her leg gingerly back beneath the water and shielded one arm over her bonny breasts.

“Angel?” he rasped. “Lass do ye ken anythin’? Clootie is a devil of a beast who’ll tear ye apart with nary a concern.”

“Oh, he’s just a big sweetie.” Kat clucked to the dog, whose tail thumped loudly on the floor.

Sweetie? Was she daft?

Simeon snatched the cloth rudely from her hand, his face twisted in darkening rage.

Kat peered up at him and snorted. “Oh right. Like I speak Gaelic?”

“Who else de ye ken would cause me tae tear apart this keep in an uproar?” He thundered and braced his arms on either side of the tub, caging her in. His anger surged well past the relief of seeing her, and he couldn’t stay the bitterness from his voice.

“How should I know what’s got your kilt in a twist? For all I ken, it was probably that… that woman.”

“The one you left me for, Sim. Sorry to interrupt your little affair, but don’t worry. I won’t cramp your style. I’ll be out of your century just as soon as I can figure out how to get back to mine.” 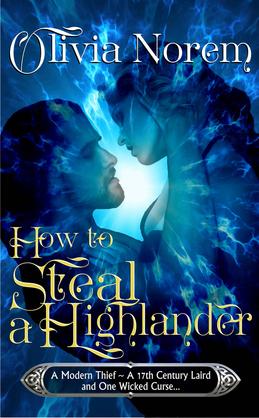